Following an upward spike in Consumer Confidence in July 2020, the overall consumer sentiment, which is a major indicator from a consumers’ perspective, started to deteriorate once again in August, based on research conducted by a leading business consultancy firm EMCS, on behalf of the European Commission.  Due to this decrease, the index dipped back into negative territory meaning that in general, respondents are more pessimistic.  This report is based on a monthly telephone survey based on 1000 responses from the general population using a random sample. 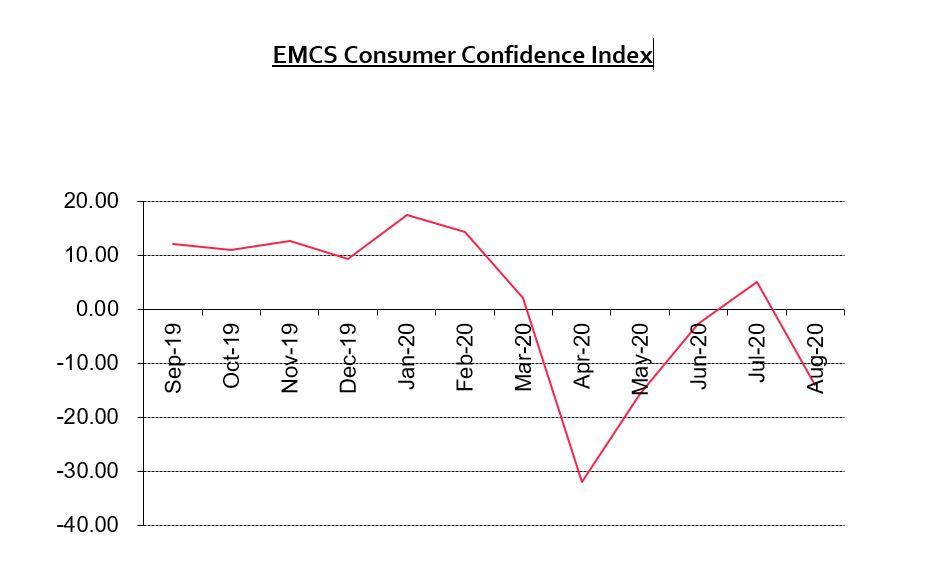 The EMCS Consumer Confidence Index (CCI) reading decreased to -14 in August 2020 from +5.11 in July 2020.  This drop in the index could possibly be linked to the fact that throughout the month of August, Malta has seen a dramatic increase in the number of detected COVID-19 cases, which resulted in a lower sentiment regarding the general economic situation, unemployment and capability to save.  This is coupled with the fact that the Maltese authorities reintroduced restrictions following a spike in COVID-19 cases.

The relatively more pessimistic respondents were females, those aged between 30 to 49, those who have completed up to tertiary education, and those households who earn less than €10,500 annually.

This website uses cookies to improve your experience while you navigate through the website. Out of these, the cookies that are categorized as necessary are stored on your browser as they are essential for the working of basic functionalities of the website. We also use third-party cookies that help us analyze and understand how you use this website. These cookies will be stored in your browser only with your consent. You also have the option to opt-out of these cookies. But opting out of some of these cookies may affect your browsing experience.
Necessary Always Enabled
Necessary cookies are absolutely essential for the website to function properly. This category only includes cookies that ensures basic functionalities and security features of the website. These cookies do not store any personal information.
Non-necessary
Any cookies that may not be particularly necessary for the website to function and is used specifically to collect user personal data via analytics, ads, other embedded contents are termed as non-necessary cookies. It is mandatory to procure user consent prior to running these cookies on your website.
SAVE & ACCEPT
Malta and Russia agreed to amend the taxation treatyUnemployment figures defy the odds and register a 2nd consecutive decline